He might be a reluctant hero but Need for Feed founder Graham Cockerell takes pride in the $30 million hay bail-out for struggling Aussie farmers. Tony Fawcett reports.

As an 11-year-old, PDG Graham, founder of Lions-based Need for Feed which in 15 years has delivered $30 million worth of hay to ailing farmers, suffered the loss of his father to farm-related suicide.

The memory and sadness of that event, which forced the selling of the family farm, has never left him.

Looking back on Need for Feed’s phenomenal record in helping drought, fire and flood affected farmers, Graham confirms his father’s death was a catalyst in the project’s 2006 founding.

It was around the 40th anniversary of his father’s death that Graham got involved. “It was the middle of the Millennium Drought and in Victoria, “ he recalls, “we had drought and fires at the same time and there were media reports that three farmers per week were taking their own lives. That all came home to me and I was in a position to be able to help somebody, which I did.”

First off, he delivered a load of his own hay to bushfire-ravaged Cowwarr in Victoria’s Gippsland. “That was going to be all there was to it, but it’s the old story … when I saw the enormity of the problem I felt I had to do something,” he says. “So we rounded up those we thought could help and the starting point was my own (Pakenham) Lions Club.

Before Need for Feed’s launch, Graham was unable to even talk about his father’s suicide. “I just wasn’t able to have a conversation about it,” he admits.

He first publicly revealed details when interviewed on Need for Feed by former Melbourne ABC radio presenter Jon Faine. “I had to go home and tell my grown-up daughters about how my father, their grandfather, died – I hadn’t discussed it with anybody before. But now I’m able to talk to others about it, and we feel that what we are doing is really making a difference.”

Like so many of today’s ailing farmers, Graham says his dad’s suicide was not due to him being a bad farmer. Through no fault of his own he was simply faced with hurdles he felt he could not overcome.

“There are a lot of good farmers out there, and I suppose some bad ones too,” says Graham. “But even the good ones get caught up in events that go for way longer than expected, whether a one-in-100-year drought or the latest floods on the NSW mid-north coast.” 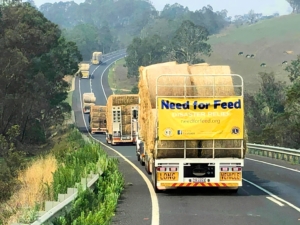 ON THE ROAD: In 15 years Need for Feed convoys have delivered approximately $30 million worth of hay to ailing farmers.

Although reluctantly in the Need for Feed spotlight and ever anxious to deflect praise to his colleagues, Graham takes pride in the project having donated about 5,000 truck loads of hay or 180,000-200,000 bales, the equivalent of about $30 million, in 15 years.

Often a delivery has meant the difference between a farmer walking off the land and not.

Need for Feed has few problems finding volunteers. “It is getting bigger but it’s getting easier to manage in that we’ve got more people helping,” says Graham.

“Once most people try it they enjoy it and they’re hooked and keep coming back to help.”

Two-thirds of volunteers are Victorians, yet now many are based on the NSW mid-north and central coasts with hay runs in nearly all states. Just over half the volunteers are female.

In March the operation had grown so much a specialist Lions club was formed to relieve the Pakenham club. Regular volunteers were approached to become founding members of the Lions Club of Victoria Need for Feed, and of the 30 approached 29 happily joined.

Today Need for Feed is the only fulltime rural aid group among the big five Australian farm charities run totally by volunteers.

News of its efforts has spread wide, with donations from as far away as the US and UK, with 8,000 UK pounds recently donated by young Isle of Mann farmers, to be split between Need for Feed and St Vincent de Paul for bushfire relief.

Now a registered charity with Deductible Gift Recipient (DGR) status, it provides corporates with a tax deduction when they donate.

Recent activities have been concentrated on NSW flood areas, with a run on average every month.

The project’s biggest run to date involved 90 trucks from Dubbo to as far as the Hunter Valley and the centre-west.

Along with hay, Need for Feed donates care packs and food hampers, including food for our canine mates (every farm has at least one dog!)

At 66, Graham, who runs a garage and spray-painting business with his partner and Need for Feed secretary Claire Johnston, acknowledges he has “probably spent too much time helping others and not enough building up a bank account” – but he wouldn’t have it any other way.

Retirement, he says, will have to wait.

To volunteer/donate to Need for Feed, visit www.needforfeed.org

Lions continue to go above and beyond to help the community through COVID-1...