With our milestone birthday in just three months, Tony Fawcett takes a nostalgic look back to the beginnings of Lions Australia

Know what the initials L- I- O-N-S stand for?

Today Lions stands for community service but back when the organisation was being launched in Australia, it was explained to potential members that L stood for Liberty, I for Intelligence and O-N-S for Our Nation’s Safety.

Lions Australia might not have happened but for William “Bill” R. Tresise’s unhappiness that, nearing 40, he would according to rules soon need to retire as the 11th National President of Apex.

He was even unhappier when his attempts to form a senior Apex movement were rebuffed.

Fortuitously, a chance 1946 meeting with a soon-to-be International President of Lions led him to a meeting with the Secretary-General and Founder of the Lions Association, Melvin Jones, in Chicago.

In quick time he found himself appointed a provisional District Governor, with power to form Lions clubs in Australia. 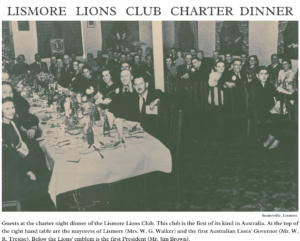 WHERE IT ALL BEGAN: The year was 1947 and with the encouragement of far-sighted William “Bill” R Tresise locals flocked to a Lismore, NSW hotel for the chartering of Australia’s first Lions club.

The next year Bill, the owner of a plaster and hardware business, formed a club in his home town Lismore, followed by Murwillumbah (1948).

His aim was to have a Lions club in every town with a population of 3000-plus.

Australia was the 18th country to enter the International Association of Lions Clubs.

When Sydney lawyer Bill Berge Phillips and friend Charles Copeland heard about the International Lions movement from local founder Bill Tresise, they determined to form a club in their home city.

Their big problem early on was getting members because few in 1952 Sydney had even heard of Lions – and it didn’t help that on sighting Bill’s Lions badge many enquired what the “Liars Club” was all about.

A decision to demolish a fountain commemorating Lismore as the 1947 birthplace of Lions Australia created a public furore several years ago.

Constructed 20 years after Bill Tresise founded the first Australian Lions club, the fountain had fallen into disrepair and was considered by some as not worth saving … that’s until local Lions and others got involved.

Sensing the mood of the moment, the local council quickly moved into action, working with Lions to raise funds for restoration.

The following year the revamped fountain was unveiled, appropriately on the 70th anniversary of Lions Australia, with the addition of colourful mosaics telling a visual history of the organisation.

Enthused the local mayor: “The new artwork is a beautiful tribute to the rich history of Lions in Australia and we are very excited to be able to unveil it to the general public.”

Fittingly the unveiling was followed by a sausage sizzle.

While the good deeds of Australian Lions have never been doubted, it’s fascinating to look back at how the language has changed since early Lions gatherings.

At the first National Convention, staged in Coolangatta in 1953, for instance, no-one reportedly raised an eyebrow when it was announced to all that Australians had much to be appreciative of, including “the lovely luscious ladies which graced its shore”.

Likely this choice of adjective was then not considered politically incorrect, given the word “male” would not be dropped as a condition of Lions membership for another 34 years.

Stickler for getting it right 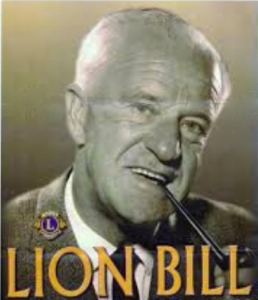 DRIVING FORCE: Whether grammar or starting new clubs, Lions Australia founder Bill Tresise was a stickler for getting it right.

Australian Lions today owe much to local founder Bill Tresise for his attention to detail. As a perfectionist dedicated to personal development, he ensured the organisation’s launch ran along strict professional lines.

These demanding goals even extended to his family. As one of his sons, the late Max Tresise, would later reveal, his father disapproved of poor grammar and would have offenders among his young family repeat something until it could be recited word perfectly.

“We were encouraged to learn Rudyard Kipling’s poem entitled ‘If ’, even though it took months to memorise,” recalled Max. “We had to be word perfect before Wally and I, aged about 14 and 12 years of age, received our generous reward of 10 shillings each.”

Lion to the rescue

Early clubs were quick to realise the value of the Lions name. When Australia’s second Lions club, Murwillumbah in north-east NSW, decided it needed to act after the disastrous 1954 floods claimed an estimated 30 lives in the region, it commissioned a wooden rescue boat and named it the Lion.

Just 15 days after its launch, the Lion, which cost 745 pounds, was in action evacuating flood-bound people from low lying areas of South Murwillumbah.

Crews worked into the night on that mission of mercy, which won wide local praise.

Not even its sinking after being holed by a submerged fence post could stop the Lion’s ongoing rescues in the flood-prone region. It was quickly repaired by local company C Hawkins and Son that had built it and returned to service.

The countdown is on – Lions volunteers are celebrating 75 years of always...

A story of hope
Scroll to top