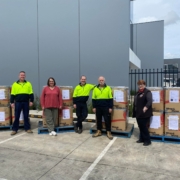 To date, the Lions Australia Diabetes Foundation has donated $5,000 to assist the delivery of donated care packages to Ukrainian refugees with diabetes.

The grassroots community project has produced and delivered 740 care packages to the Children’s Diabetes Foundation and Polish Diabetes Association in Warsaw, Poland.

A community of 200+ Australians with type 1 diabetes have also been tirelessly bundling up these care packages for shipment since the war began in Ukraine.

Lions Australia’s National Diabetes Coordinator, Pat Mills provides insight into how the Diabetes Foundation has navigated through an international war to help some of our most vulnerable diabetics: 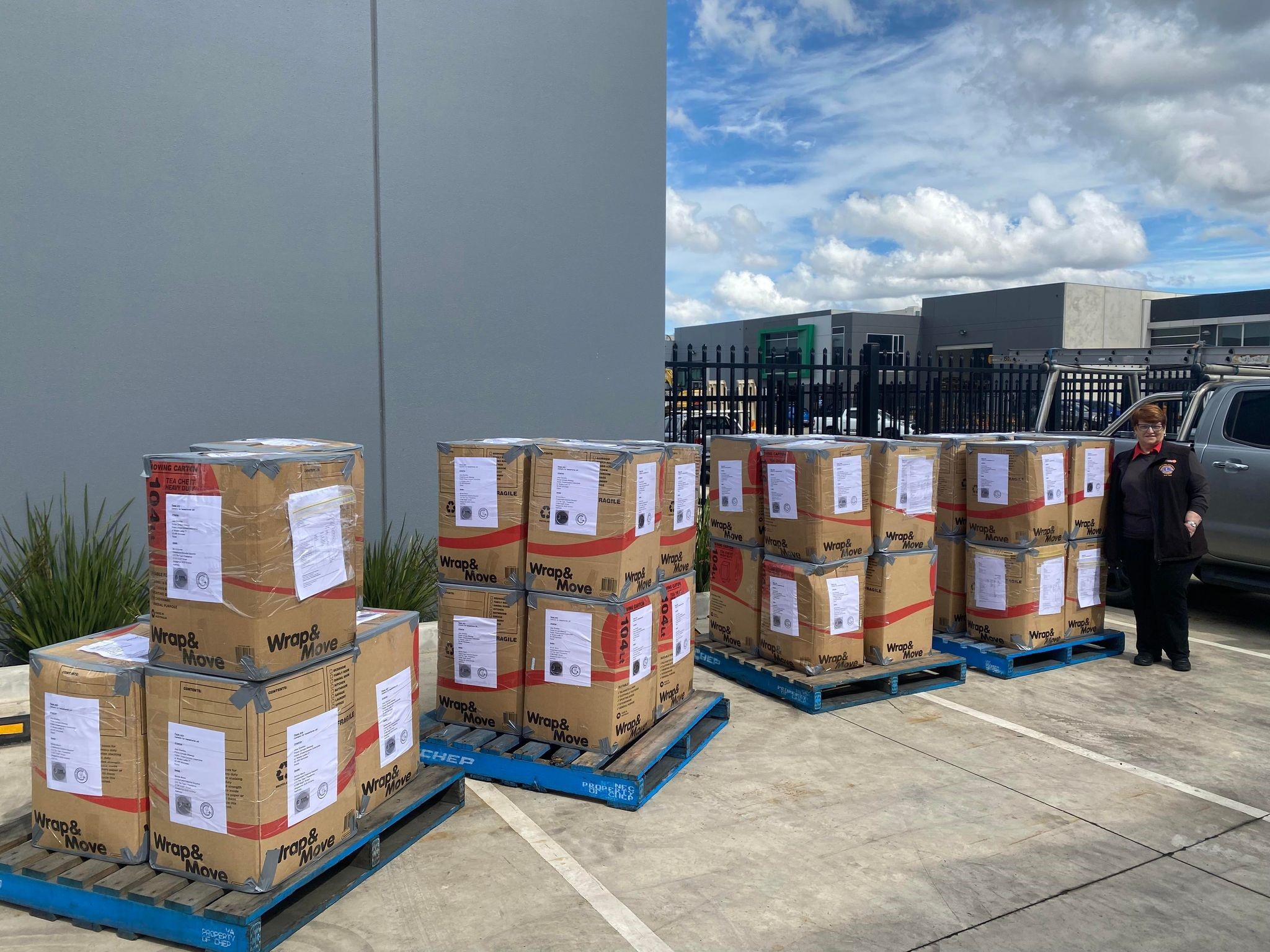 Care packages ready for sea transport to Warsaw for Ukrainian refugees with Diabetes.

“On 28th February 2022, I first connected with Dominika Antoniszczak, a Polish doctor with type 1 diabetes herself, in Warsaw.

Then we spoke with credentialed Diabetes Educator, Belinda Moore to discuss how our Australian diabetes community could assist Ukrainians with type 1 diabetes who suddenly found themselves with no diabetes supplies due to the war.

We were aware that international organisations like Insulin For Life were providing immediate relief by supplying insulin for people with diabetes directly in Ukraine.

We wanted our care packages to include not just diabetes supplies, but comforting treats like entertainment packs for kids and warm essentials like beanies for adults. We also knew that as a community group, we wouldn’t have the resources to send supplies directly into Ukraine due to the war.

Knowing that other organisations were already assisting, we didn’t want our care packages to arrive to Poland too soon after the war began as we knew that it wouldn’t be long before the media decreased their focus on the war in Ukraine and moved their attention to other global events.

We wanted our care packages to arrive to Poland at a staggered rate over months to come…we knew that Ukrainians with diabetes would be needing support for a long time to come as they learn to rebuild their lives. 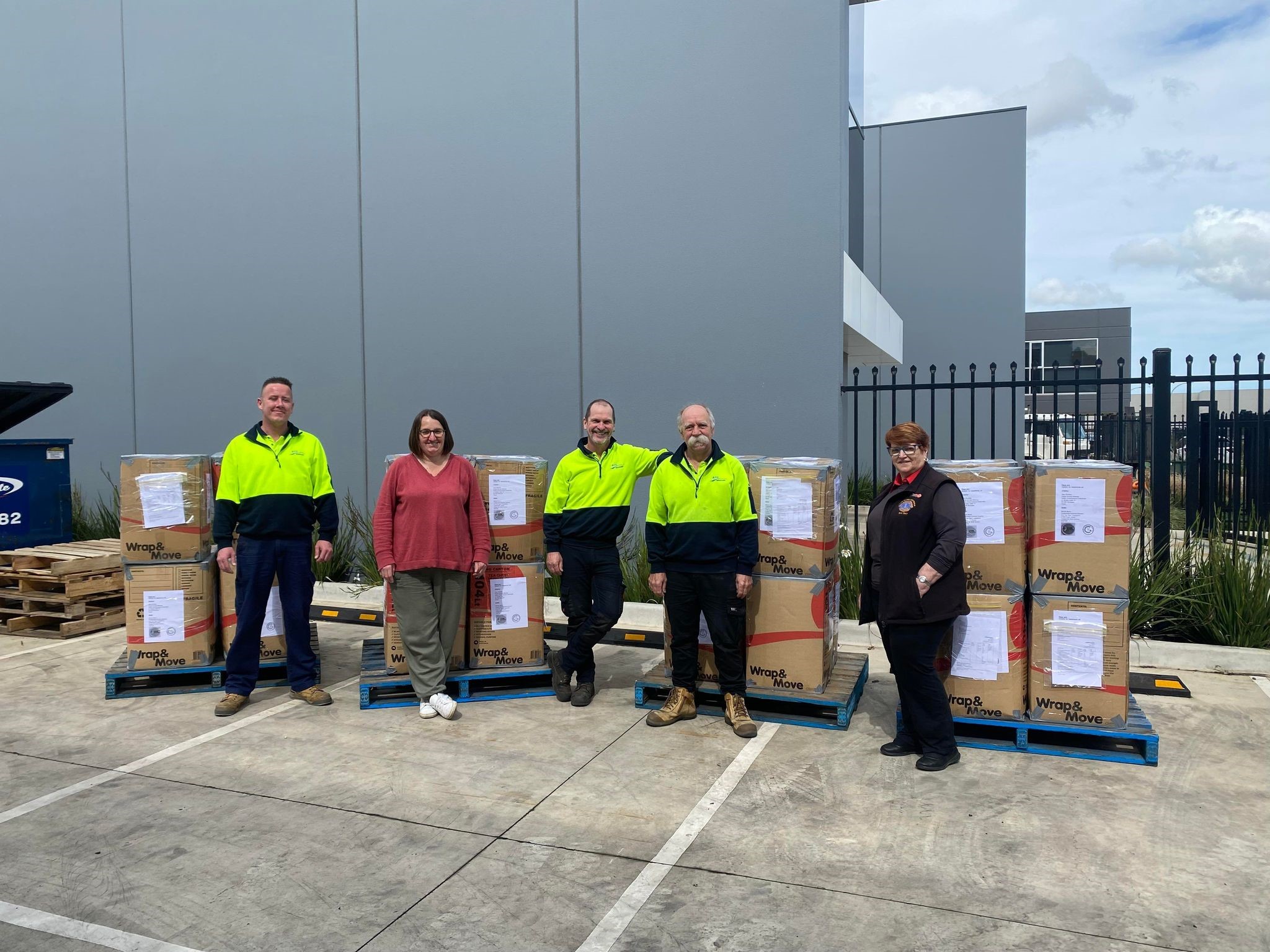 Our care packages were sent to Poland for those who would need a boost in their own diabetes services infrastructure as they found themselves having to support Ukrainian refugees with type 1 diabetes in addition to supporting their own type 1 diabetes community.

Between March and August, we have had an incredibly dedicated diabetes community receiving donations to their own homes and diabetes clinics across Australia followed by families and individuals bundling these donations into care packages. Care packages have been created for children and adults who manage their diabetes on MDI and pumps.

There have also been care packages created for new mothers who had diabetes in pregnancy.

Although the main objective of this project was to send diabetes supplies, daily essentials and comforting treats; the outcomes for our Australian diabetes community who volunteered in this project was so healing. Australians felt so helpless as they watched the war unfold. They just needed to help.

Becoming involved in this project created an inspiring level of capacity and capability building amongst our own diabetes community in Australia resulting in the development of individual and community resilience”.

Anyone wishing to help support the project can contact the Lions Australia Diabetes Foundation. 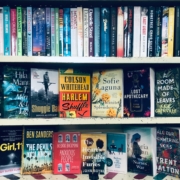 In times of crisis Lions Clubs do what they can to make a difference and that’s exactly what local volunteers are doing right now to support the humanitarian crisis in Ukraine.

The Glenside Lions Club run the Glenside Bookmart, known as the largest and most loved second hand bookstore in South Australia, and have generously offered their entire takings for the month of June to the Ukrainian appeal.

The target for June’s book sales and resulting donation is $20,000. 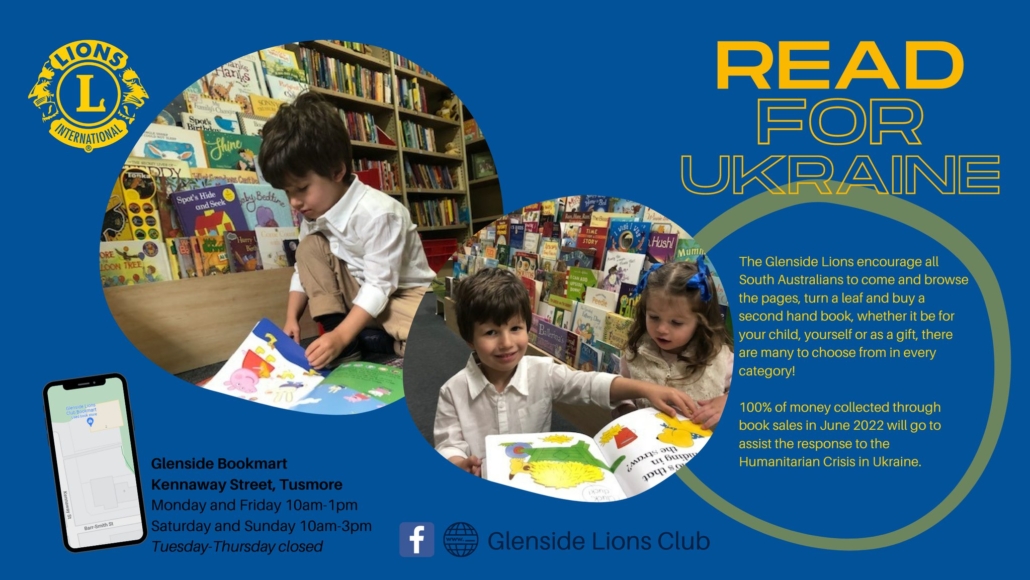 Glenside Lions President, John Standingford says, “the conflict in Ukraine has driven millions of people from their homes, creating a humanitarian crisis that is forcing families to search for safety and security.”

“We can’t send them weapons and ammunition, but the money we send will buy immediate relief items for those who have fled Putin’s onslaught – such as food, clothing, hygiene supplies, sleeping bags and medicine.”

The expanded children’s section at the Glenside Bookmart is designed to encourage children to explore and read with no pressure to buy. Prices of children’s books are typically $1− $3.

The Glenside Lions encourage all South Australians to come and browse the pages, turn a leaf and buy a second hand book, whether it be for your child, yourself or as a gift, there are many to choose from in every category!

In addition to local Lions projects and initiatives in Australia, the Lions Clubs International Foundation has now provided over US $1,153,260 in grants to support Ukrainian refugees who have crossed their borders. Lions in Ukraine have also received LCIF grants to address the critical needs of people who remain in the country.

To find out more about how you can help support Ukrainian refugees with the Glenside Bookmart, click here. 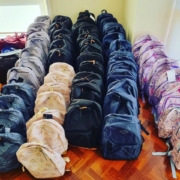 Diabetes is a key global focus for Lions Clubs and volunteers in Australia are coming together to support people all over the world including Ukrainian refugees with Diabetes.

Lions Australia’s National Diabetes Coordinator Pat Mills says the packs with vital supplies are being sent to refugees in Poland.

“At Lions, we are dedicated to doing what we can to help those in need both in our local communities and globally. Medical supplies are vital for Diabetics and we know there are many displaced Ukrainians that are in desperate need of supplies so our volunteers here in Australia are packaging up little medical kits to send to refugees. To date, we have sent over 200 packs to Poland.”

“Many of us have been watching the devastation in the Ukraine and want to do something to help. It’s a simple project for us but we are providing vital medical support,” says Pat. 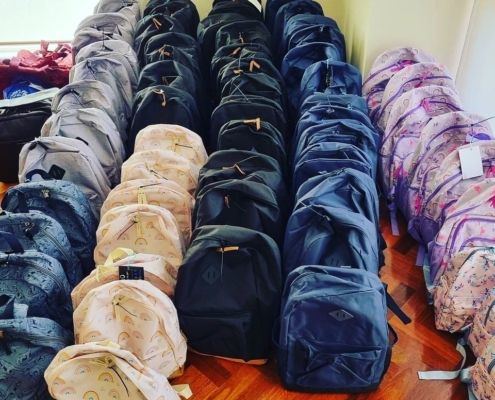 67 care-packs ready to send to Poland for Ukrainian refugees

Members of the Lions Club of Shepparton have been assisting on the project, collecting supplies and packing bags to ship to Poland.

In a symbolic gesture, Club President Patsy Lansdown has organised for 2000 paper cranes to be made; inspired by the story of Japanese girl Sadako Sasaki, who developed leukemia after an atomic bomb was dropped on Hiroshima during World War II.

Along with the care packs, the folded creations will be taken to Poland as a symbol of peace, hope and courage.

Anyone wishing to help support the project can contact and donate to the Lions Australia Diabetes Foundation.