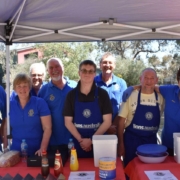 The Kyabram Lions Club will donate money from its activities account to help those affected by the floods in NSW and Queensland, president Tony Alford said.

While the Kyabram Lions can’t physically help out with the clean-up, they are joining the network of over 1200 Lions clubs across Australia that are mobilising to get help to those impacted by the current floods through the Australian Lions Foundation Disaster Appeal.

“We know many of our Lions volunteers in affected areas are out there doing what they can to help. The National Appeal gives Lions clubs across Australia and members of the public an opportunity to help too.“Every dollar raised will be sent directly to local Lions clubs to provide emergency support to those in need.”

The Lions have been providing emergency support to communities in need for decades.

Australians looking to make a donation and support those affected by the floods can do so through their local Lions club or through donating directly to Australian Lions Foundation.

Mr Alford said that the pandemic had limited how often the group could get out into the community, but now members would be doing a lot more service and were calling for community support.

“Things like, go to the rodeo, and support the local town, which in turn supports us,” he said.

“Every time you see a Lions person out doing something, support them.”

The Kyabram Lions Club’s average age is 60, and Mr Alford said the Lions would really benefit from younger members.

“We’ve noticed over the last few years that there hasn’t been much interest from younger people to join a service organisation,” he said.

“We appreciate that people are too busy with work and family and stuff like that. They can’t devote as much time to service organisations compared to 15 to 20 years ago when people were a lot more service-oriented.

“So we’re always looking for new members and we’d like some younger service-minded people to maybe look at Lions and join us.”

Every dollar donated will be sent directly to local Lions clubs on the ground in affected areas. Tax deductible donations can be made at https://www.givenow.com.au/australianlionsfoundation 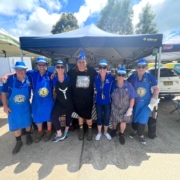 This interview is with Wendy Poole, Secretary of the Goonellabah-Wollongbar & Districts Lions Club, in the flood affected areas around Lismore.

She talks to ABC Canberra about how volunteers and community groups like Lions are driving the disaster response.